My to-do list is scary. Actually, there’s no single to-do list, but rather a range of different to-do lists scribbled over different apps. Things have gotten so bad that I’ve made a to-do list which comprises solely of ‘sort out to-do lists’. How meta.

One of the things that’s been sitting on a few of my to-do lists is to put Liverpool’s local election results into STATA and see if the data throws up anything interesting (I know, I need to calm down). Funnily enough, the data confirms a lot of what I had already accepted as fact. This is good for me, since I’m the kind of person who prefers statistics to case studies or ‘common knowledge’.

Anyway, I thought instead of just hiding the results away and perhaps forgetting about them, I’d throw them into a little blog post.

NB: the graphs below will not look great because STATA seems designed to impede the production of presentable graphs. Also, spoiler: number 2 isn’t really a shocker, I just hoped a Buzzfeed-style title would draw in an audience. Next week: 6 things the Liverpool Tories did which lost them votes (you won’t believe number 3!). 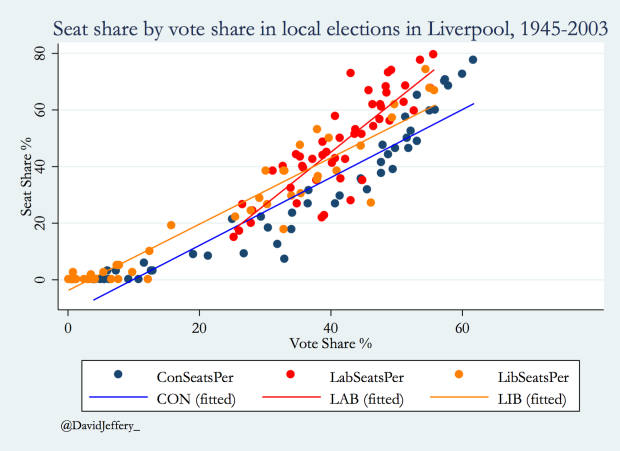 However, there were two local boundary reforms between 1945 and 2003. It stands to reason that changing how Liverpool was divided up would impact on the translation of votes into seats. The next graph breaks up the period into the three boundary regimes.

As we can see, until 1952 the relationship between vote share and seat share was almost exactly the same for the two main parties. However, the 1952 local boundary reforms significantly benefitted the Labour party – on average, a vote share of 40% for both parties would result in ~30% seat share for the Conservatives, whilst Labour could expect ~50% of the seats.

Following the 1973 boundary reform, the Conservatives were further harmed by a concentration of votes in a small number of wards, meaning that even when their voters turned out in high numbers, the party could expect a significantly lower seat share – on 35% vote share the Conservatives could expect just over 20% of the seats, compared to Labour’s 40% and the Liberal’s 35%.

Overall, these results suggest that Labour’s vote was indeed spread more efficiently across the city than the Conservative’s vote was. However, when the Liberals replaced the Conservatives as the main opposition to Labour, they did not suffer with this problem to anywhere near the same extent.

2) Labour did better when turnout was high

In the first period, we see that in fact higher turnout tends to slightly benefit the Conservatives at the expense of the Liberals. This relationship is minor, however, and the Liberals were goosed either way. Turnout seemed to have no impact on the Labour vote.

Between 1953-73, we do see a strong decline in Conservative vote share as turnout increases. Indeed, this is almost totally as a result of the rise of the Labour vote. This suggests that it was Labour that lost elections, rather than the Conservatives winning them, by not getting enough supporters to vote. Labour apathy benefitted the Tories.

In the third period, we see a similar pattern, but with different parties. Low turnout now seems to benefit the Liberals, and as turnout increases both Labour and the Conservatives can expect to increase their vote share. However, this result is skewed somewhat by the anomalous 1979 local election result (the three dots to the far right). This local election was held at the same time as the 1979 General Election, at the end of the unpopular Callaghan government. As such, both turnout and Conservative vote share are exaggerated here, and without this year included the Conservative trend line becomes much flatter, suggesting that over this period as turnout increases Conservative vote doesn’t change.

However, the third period hides important changes in the effects of turnout on Conservative vote share, due to the party’s rapid decline from 1973 to 2003. If we split the third period into decades (nb the 1990s includes up until 2003…), a clearer picture emerges.

In the 70s, there was a slightly negative relationship between turnout and vote share. This became more dramatic in the 1980s, somewhat explained by high-stake elections in the 1980s surrounding Militant, which would generate higher turnout from its supporters, whilst Conservative voters would face pressure to vote Liberal to keep the trots out. Finally in the 1990s/early 2000s, we see that as vote turnout increases the Conservative vote share increases slightly, but this is all pointless because they rarely top 10%…

3) The Liberals took more votes from the Conservatives than Labour

This statement passes for common knowledge in the political history of Liverpool, and is justified by the data. 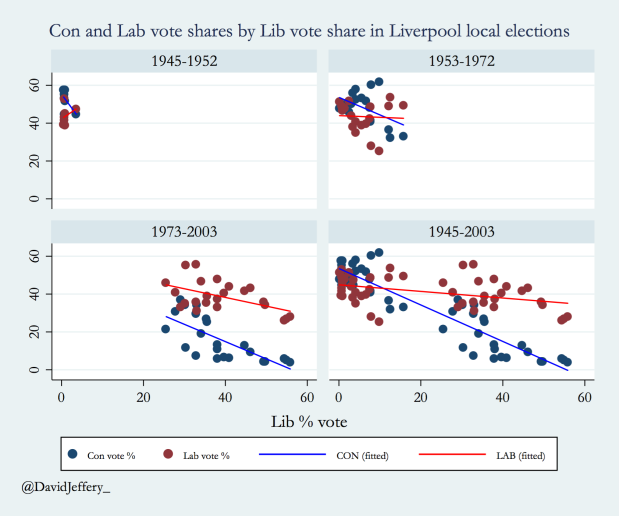 We can see that in 1953-73, as the Liberal vote increased, the Conservative vote declined whilst the Labour vote remained static. This suggests that the Liberals were indeed taking votes from the Conservatives whilst barely denting the Labour vote. What should be noted though is that, on average, it took a Liberal vote of over 10% in this period for Labour to best the Tories (although as previously mentioned, even with the Conservatives ahead in the popular vote Labour could still win a much greater seat share).

Between 1973 and 2003, the Liberals begin to take votes from both the Conservatives and Labour – although for every percentage increase in the Lib vote share the Conservatives suffer to a greater extent than Labour do (based on the steepness of the line).

Obviously, this is only a basic analysis of election results. There is still plenty to do which could generate quite a bit of new knowledge (and plenty more which would generate nothing). So far though, the ‘received wisdom’ seems to be legit.

NB: if you’ve got any comments/tips/advice/demands for money let me know either in the comments or on twitter, @DavidJeffery_.